Flatbacks, a name given during the latter part of the 19th century due to the introduction of the business practise saving the cost of decorating the rear of the figure. These pieces were aimed at the working class masses, designed to stand against a wall atop a fireplace or shelf, they ooze charm.

Thousands of characters, events, animals and incidents were immortalised in fired clay, available to purchase for a reasonable sum and intended purely for display. They represented what was happening around people and appealed because of the price, elaborate colouring and simplistic modelling. Antique British Pottery at it's, mass produced, finest. 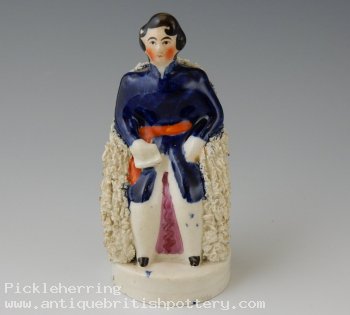